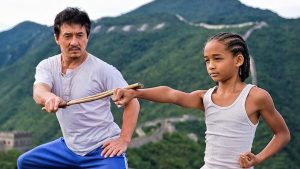 When it comes to martial arts for kids, Taekwondo should be on the top of parents’ lists. But popularity aside, when studying taekwondo your kids reap some great benefits.

Because taekwondo’s forms vary, your kids learn how to control their bodies and improve their balance muscle strength, and flexibility.

Regian “The Immortal” Eersel – a Dutch-Surinamese kickboxer started taekwondo very early when he was just eight years old. In May 2019, Regian Eersel owned the ONE Lightweight Kickboxing World Champion. He originally took up the martial art to learn self-defense and burn energy.

The focus of kung fu is on techniques of balance and relaxation. This probably isn’t the martial art you should choose if you child has slow reflexes or doesn’t do well in close personal spaces. if your child struggles with kicks, upper body movement is good and that’s Kung Fu relies on. This is a good pick If you want to choose a sport that focuses on concentration and balance for your kids.

Judo is an Olympic sport which was designed to use the opponents attacking mentality against strikes and defend against them. Timing and controlling your opponent’s body weight are involved while concentration is on throws.

This isn’t the discipline if your child likes a martial art which involves striking. Judo is one of the best if your kid prefer learning throws and defense.

Wrestling involves various pins, takedowns and locks. Your kids will have unequalled physical and mental conditioning because wrestling is one of the toughest sports to train and compete in.

Brandon “The Truth” Vera – a Filipino-American competitor started wrestling in college and he joined the military’s Greco-Roman wrestling team into the United States Air Force where he carried the love of the sport with him. Brandon Vera continued to build up his wrestling foundation, and in December 2015 he won the inaugural ONE Heavyweight World Championship.