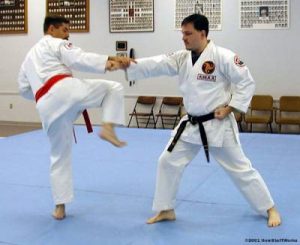 1.  is a martial art developed from Thai boxing and karate. If classic boxing only uses punches, kick-boxing combines punches and kicks. Currently this martial art is loved by young people not only for self-defense and antagonism but also for health training. In this subject, boxers fight more freely than boxing. Kick-boxingThe foot movement, observation and punching by hand of kick-boxing provide maximum movement for all muscles. It is the work of both observation and movement that will help the practitioner train more quickly – a big difference compared to bodybuilding or running.

2. Karate or Karate-Do is a traditional martial art of Okinawa (Japan) region. Karate is known for its art of fighting with specific moves such as punches, kicks, elbows, knees and open-handed techniques. In Karate, there are also punching techniques, continuous kicking techniques, locking moves, blocking, dodging, knocking and hitting pieces. To increase the strength of the attacks, Karate uses hip rotation techniques to concentrate the body’s energy at the time of the impact.

3. Aikido is a modern Japanese martial art created by Ueshiba Morihei (1883-1969) on the basis of Japanese traditional martial arts such as Jutsu (Jujitsu), Sword Art (Kenjutsu), and Martial Arts (Sojutsu). In Aikido, like all Japanese martial arts, there is also physical training and spiritual training. Physical training in Aikido is very rich, including physical training and general experience, as well as special techniques. Because an important part of practicing Aikido always involves throwing an opponent, so the first thing students need to learn is how to fall or roll safely. Special fighting techniques include hitting and grasping; Defense techniques include throwing and locking. After learning the basic techniques, the students began to defend freely against many opponents, and in many cases anti-weapon techniques.

4. Wing Chun is a martial art that originated in Nanling in Fujian Province, China. Although It is very likely that the sect has a history of not less than 400 years, most people affirmed the original origin of Wing Chun from the anti-Ming support-Quing movement about two centuries ago. The sect has been introduced to neighboring countries and the West in modern times. Bruce Lee’s success on the screen in the 1970s helped to promote the image of sectarianism all over the world, bringing Wing Chun right from being silently taught in families to being one of the most well-known and passionate martial arts, with millions of disciples and dozens of sects around the world.