Martial arts teache lessons that are applicable long after you are done with the sport. Whether you practice Muay Thai, Karate, Judo, or any other form of martial art, you stand to learn a lot, both physically and mentally. Having said that, here are some notable personalities who credit their success in life to their early practice of martial art.

Vladimir Putin enjoys a solid reputation in martial art fighting. He started practicing Judo at 12 years of age, to date. His commitment on the pitch is admirable, to say the least, and he holds a 9th -degree black belt – 9 black belts to his name. His prowess on the pitch is a testament why he enjoys massive success in the political scene, though arguably.

Winnick is a highly regarded actress who recently starred in a popular TV series, The Vikings, as Lagertha. This blond-haired actor is a 3rd Dan black belt in Taekwondo. Winnick actually won her first black belt when she was only 13 years and started teaching martial arts at 16. From recent interviews, she strongly believes that her early engagements in martial arts inspired her success in the film industry.

Van Damme started training Shotokan karate, Muay Thai, and Taekwondo at the age of 12 years. Moving from martial art to becoming an acclaimed actor, his tough character and personality keep him making headlines every other day. His solids appearances in films such as the Expendables 2, Kickboxer, and Timecop make him an action movie legend. 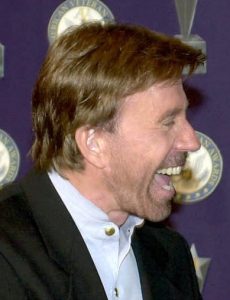 Another key personality whose life has been inspired by martial arts is Chuck Norris. He has a background in different types of martial arts genres such as Tang Soo Do, Chun Kuk Do, Judo and Brazilian Jiu-Jitsu, all of which he is a black belt holder. His success in martial arts is believed to be a key reason why he enjoys a glorified entertainment career.